The Solent is a strait separating the Isle of Wight from the mainland of England. First recorded in 731 as Soluente, Solent is “an ancient pre-English name of uncertain origin and meaning.”The Solent is a major shipping route for passengers, freight and military vessels. It is an important recreational area for water sports, particularly yachting It is sheltered by the Isle of Wight and has a very complex tidal pattern, which has greatly benefited Southampton’s success as a port. Portsmouth lies on its shores. Spithead, an area off Gilkicker Point near Gosport, is known as the place where the Royal Navy is traditionally reviewed by the monarch of the day.The area is of great ecological and landscape importance, particularly because of the coastal and estuarine habitats along the edge of the Solent. Much of its coastline is designated as a Special Area of Conservation. Most importantly for the purposes of Chartering Cetewayo, the Solent provides a protected diverse cruising ground for day chartering. Whilst the  destinations of Osbourne Bay, Cowes, The Beaulie River and Newtown are all accessible over the majority of weather and tidal conditions for Day charters, only under certain wind and tidal conditions is it possible to visit the following destinations during a one day Cetewayo Charter.

The Hamble River is tidal for approximately half its 12 Km length  and is navigable in its lower reaches, which have facilitated shipbuilding activities since medieval times. Leisure craft are still built there today, whilst in the past its shipbuilding yards, have also been used for military purposes, particularly during world war II, in the construction of the mulberry harbors specifically designed for the D day invasion in 1944.  The  lower reaches of the river are now very popular for boating, being known throughout the sailing world as The Heart of British Yachting Is home to probably the great concentration of yachts in the northern hemisphere. Indeed Its long deep tidal river facilitates  no less than seven marinas, and in addition there are traditional piles and moorings that run its length all the way to Burseldon bridge. Despite its crowded nature it is still a very attractive yachting centre, and is also the Home to Cetewayo which is based at Mercury Marina. 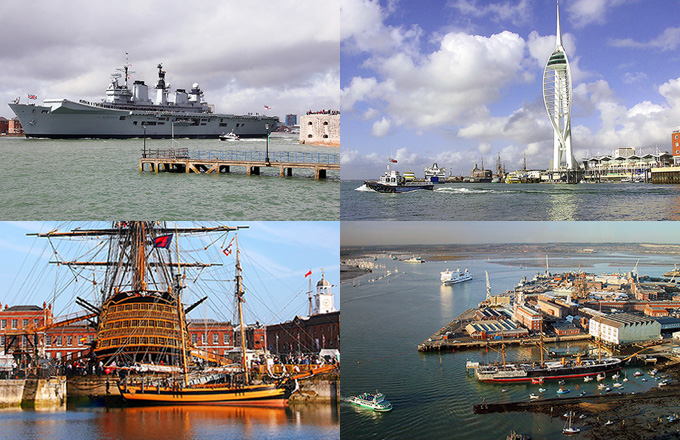 Portsmouth is notable for being the United Kingdom’s only island city located  on Portsea Island. It has been a significant naval port for centuries, Portsmouth which is home to the world’s oldest dry dock which is still in use still in use. The Portsmouth Dock yard has also become home to three famous historic warships including the first RN iron Clad HMS Warrior, the Tudor carrack Mary Rose and Lord Nelson’s flagship, HMS Victory. Although smaller than in its heyday, the naval base remains a major Dockyard and base for the Royal Navy and Royal Marine Commandos whose Headquarters resides there. There is also a thriving commercial ferryport serving destinations on the continent for freight and passenger traffic. The Spinnaker Tower is a striking recent addition to the city’s skyline. It can be found in the redeveloped former shore establishment of The RN  and an area of retail outlets, restaurants, clubs and bars now known as Gunwharf Quays. This dock shopping complex makes an excellnet lunch stop in a days sailing from the Hamble.

Osborne Bay is situated on the north east coast of the isle of Wight in the eastern arm of the solent..The bay is very popular in summer as a yacht anchorage, being sheltered from the prevailing south westerly winds and can become very crowded at the weekends. The bay is inaccessible from the land and is best viewed from the anchorage from which Victoria Favorite country house can be seen rising above the trees .Osborne House is a former royal residence Of Queen Victoria and her family. The house was built between 1845 and 1851 specifically for Queen Victoria and Her Husband Prince Albert as a summer home and rural retreat. Prince Albert designed the house himself in the style of an Italian Renaissance palazzo. Following her death, the house became surplus to royal requirements and was given to the state with a few rooms retained as a private royal museum dedicated to Queen Victoria. Today it is fully open to the public, and is best visited by taxi from Cowes. 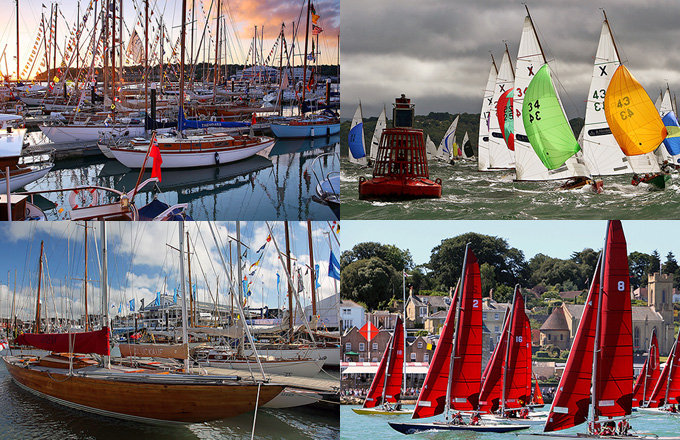 West Cowes is located on the west bank of the estuary of the River Medina facing the smaller and much less attractive town of East Cowes on the east Bank. The two towns are linked by the Cowes Floating Bridge via a very quaint chain Ferry. Cowes has been seen as a home for international yacht racing since the founding of the Royal Yacht Squadron in 1815. The town gives its name to the world’s oldest regular regatta, Cowes Week, which occurs annually in the first week of August. Much of the town’s architecture is still heavily influenced by the style of ornate building which Prince Albert popularized, and the High street is very quaint with many interesting shops for the day visitor, making it an ideal location for a day’s sailing trip on Cetewayo. 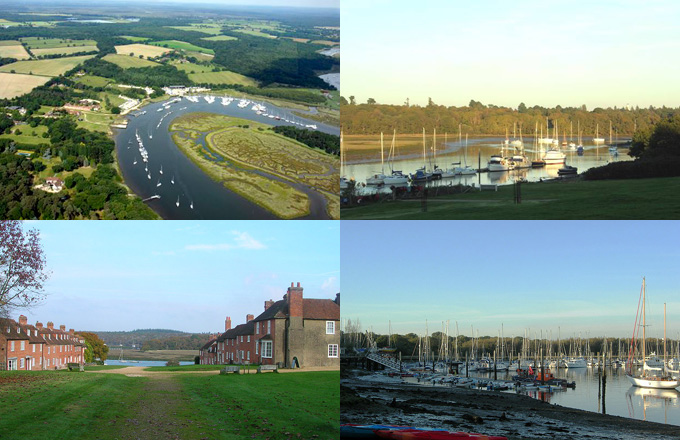 The Beaulie River is one of the most beautiful locations in the Solent and England’s South Coast. Entry to the river is over a sand bar so access is restricted to certain times of the days tides, to ensure that there is enough water under the Keel of Cetewayo which draws 2.5M of water. Once in the river there are two favorite mooring locations. The First is in the lower reaches moored on a buoy surrounded by the peace and untouched beauty of eth nature reserve. Whilst the second destination is the timeless and beautiful village of Bulkers Hard with its distinct rows of  Georgian cottage constructed for the nelsonian shipyards that running down to the river. It was the “birthplace” of many British naval vessels, including, Nelsons favorite ship the Armageddon. During WW11 the river was used to build and store the ships and harbors of the invasion fleet. There is an excellent maritime museum. The surrounding New Forest is so named because all of the original oak had been cut down to feed successive navel arms races.

Newtown is located on the large natural Harbor with a narrow entrance on the Island’s north-western coast, now mostly a Nature Reserve owned and managed by the National Trust. It is a truly picturesque location, especially in the week time when only a few visiting yachtsmen are to be seen. In medieval times it was a thriving borough port that supplied the majority of the Island with Trade. Indeed by the mid 14th century, it was slowly starting to mature into a thriving commercial center. In 1344, it was assessed at twice the value of Newport. Its harbor was busy and reputed to be the safest on the island. There was a prosperous salt works and Newtown was famous for its abundant oyster beds. There was an annual three day festival on the “eve, the day and the morrow of the Feast of St. Mary Magdalen”, who was honored in the name of the local thirteenth-century chapel. Then the plague struck, and a French raid in 1377 destroyed much of the town as well as other Island settlements. It has never fully recovered from this blow. The town hall was restored in 1813, and again in the 1930s. It is now open to the public. Newtown has stayed small, but this has led to the preservation of the original layout of the village, to the interests of historians. There are also two square ponds by the boathouse which were dug as salterns, as part of a salt industry that used to exist in Newtown. Newton is a reminder of the risk and fall of mans affairs, and how nature ultimately always takes over and reasserts its authority, and in this case it does so with an exquisite sense of tranquility and beauty. 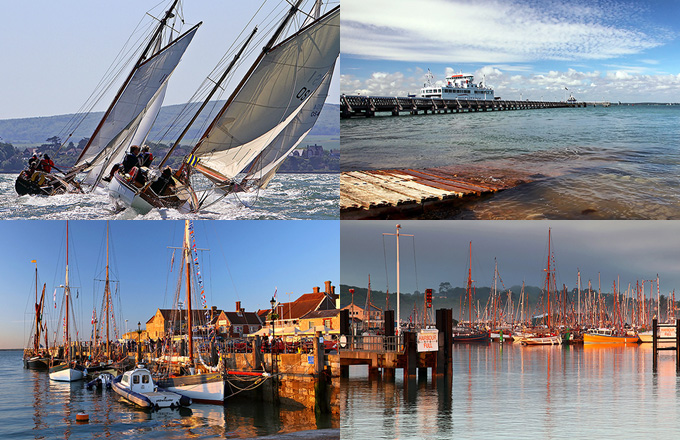 Yarmouth is in our opinion the most beautiful port in the Solent. The town is named for its location at the mouth of the small Western Yar Yarmouth is a crossing point for the river, originally with a ferry replaced with a swing road bridge in 1863 that still operates today. The town is resplendent with history as Yarmouth has been a settlement for over a thousand years, and is one of the very earliest on the Isle of Wight. The first record of a settlement here was in King Ethrelred the Unready record of the Danegeld tax of 991 when it was originally called Eremue, meaning “muddyestuary”. The Normans laid out the streets of Yarmouth on the grid system, a plan which can still be seen in the layout today. It grew rapidly, being given its first Charter as a town in 1135. Until the building of the castle by Henry VIII, regular raids on the island by the French continued, and in 1544 the town of Yarmouth was reputed to have been burned down. Legend has it that the church bells were carried off to France. Yarmouth Castle was built in 1547  and  it survives in excellent condition in the care of English Heritage. It was effectively a gun platform built by Henry VIII to strengthen the Solent and protect the Isle of Wight, historically an important strategical foothold for any attempted invasion of England. Yarmouth Pier was opened in 1876. It received Grade 2 listed status in 1975. Originally 685 ft (207.5m) long, it’s now 609 ft (186m) but is still the longest timber pier in England open to the public. 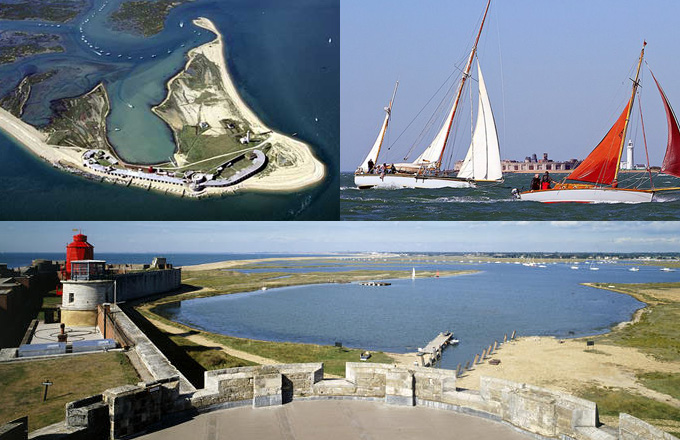 The anchorage lies to the East of Hurst Spit, and is well sheltered in conditions where the wind comes from the SW. To the North of the anchorage is the harbor of Quay Haven which is too shallow for Cetewayo, but which can be viewed from the Hurst Sand spit. The Most prominent feature of the location is Hurst Castle which was  one of Henry VIII’s Device Forts, sited at the narrow entrance to the Solent where the ebb and flow of the tides creates strong currents, putting would-be invaders at its mercy. Also known as a Henrician Castle, Hurst was built as part of Henry’s chain of coastal defenses to protect England and especially Southampton during the turbulent times of his reign. Later Charles I was imprisoned here in 1648 before being taken to London to his trial and execution. The fort was modified throughout the 19th century, and two large wing batteries were built to house heavy guns. It was fortified again in World War II and then decommissioned. It is now owned by English Heritage and is open to the public and well worth a Visit.

Alum Bay and The Needles 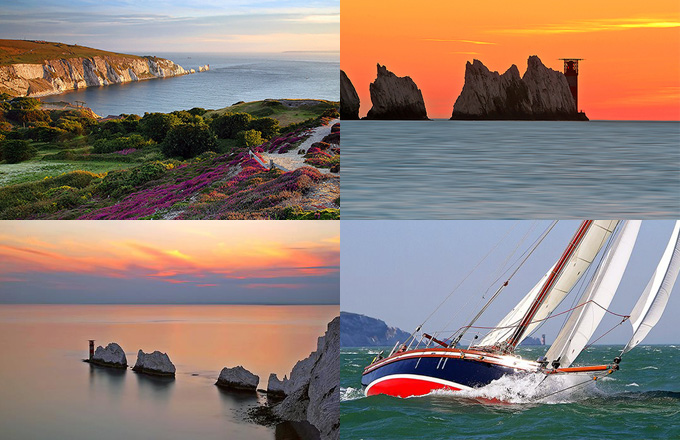 Alum Bay is a bay near the westernmost point of the Isle of Wight, within sight of the Needles. Of geological interest and a tourist attraction, the bay is noted for its multi-coloured sand cliffs. The ancorage close in to the white cliffs of the Needles, and is completely sheltered from the SW prevailing Wind. 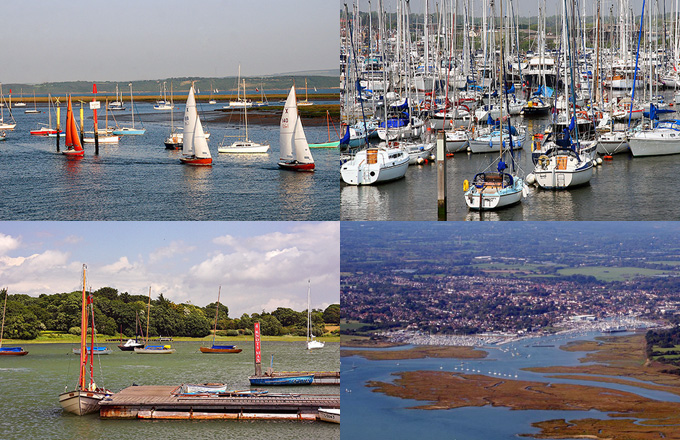 Lymington is a port on the west bank of the Lymington River on the Solent, in the New Forest district of Hampshire, England. It is to the east of the South East Dorset conurbation, and faces Yarmouth on the Isle of Wight which is connected to it by a car ferry, operated by Wightlink. The town has a large tourist industry, based on proximity to the New Forest and the harbour. It is a major yachting centre with three marinas, and a very pretty destination for a days sailing.